President Zardari addresses the people of Bahawalpur in Saraiki 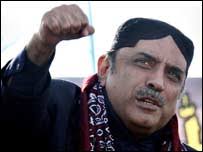 One may agree or disagree with the political ideology or personal character of President Asif Ali Zardari, who also happens to be a co-chairman of the Pakistan People’s Party. However, one may not disagree with the fact that as a person conversant in at least five local languages, i.e., Sindhi, Balochi, Saraiki, Punjabi and indeed Urdu, President Zardari represents a positive sign for the federation of Pakistan.

Asif Zardari belongs to a Sindhi tribe (Zardari) of Baloch origin (also known as Sindhi Baloch) settled in the province of Sindh, in Pakistan. Members of this tribe speak both Sindhi and Seraiki, and are found mainly in Nawabshah District.

We provide below an excerpt from Zardari’s speech in Bahawalpur (Saraiki Waseb) today (21 April 2010) delivered in Saraiki language. Previously, President has delivered a number of public speeches in various languages, e.g. Punjabi, Sindhi and Balochi (besides Urdu and English).

President Zardari visited Bahawalpur today (21 April 2010) on his two-day visit to Punjab province. The city has been festooned with pro-PPP banners and Zardari and BB pictures to accord warms welcome to the president.

Here is a news report by Samaa TV

BAHAWALPUR: President Asif Ali Zardari, while addressing a public meeting said on Wednesday that by passing 18th amendment 80 per cent manifesto of Pakistan People’s Party has been implemented.

He said that the present government has purged the 1973 constitution of bad impact left by dictators. He stated that there is a war of ideology between Pakistan People’s Party and other political parties.

“We believe that everything belongs to the people and it is a public trust that we have to safeguard.” We do not want to live in the palaces but in the hearts of people, Zardari stressed.

He held that a front has been opened in Pakistan against Pakistan People’s Party and it is an ideological war.

“Some people come in TV shows and arrogate to themselves having solution of all problems I invite them to enter into the politics and solve those problems,” he observed.

He pointed out that Bahawalpur is facing problems of electricity, gas and unemployment that will be solved.

He said that leaders of Pakistan People’s Party were assassinated but enemies of the party could not remove love from the hearts of people for the party and its leaders, he said. SAMAA