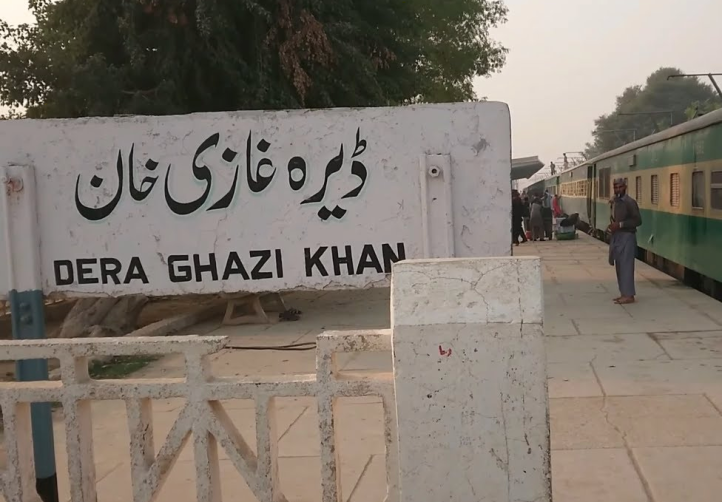 There were many things on my schedule when I travelled from Multan to Quetta by road instead of rail: to see the tomb of Ghazi Khan, to visit famous Fort Monro and familiarize myself with this less travelled rout to Quetta.

For those who take their chance for the first time to the city, it might sound too good to be true but Dera Ghazi Khan (D G Khan) in the past was known as Dera Phullan Da Sehra “land of flowers”. The canal skirted its eastern side, fringed with luxurious gardens of mango trees, while ghats lined the bank, thronged in summer by numerous bathers.

Ghazi Khan Mirani son of a Baloch chieftain Haji Khan founded the city on his own name on the tract between Suleman Range and River Indus in 1474. Bannu-Dera Ismail Khan-Jacobabad, famous trade route of the ast ran through the city. It developed into a very beautiful and prosperous city of that time. Till 1758, eighteen princes of the Ghazi Khan’s family successively ruled the city and bore the names of their ancestors, wrote Mr. Bruce in his account in 1869. Kalhoras, Durranis, Mughals, Abbasis and Sikhs also exercised control over the city before it fell to the British. Mighty River Indus had been steadily and gradually shifting its course westwards for a long time. D G Khan remained on the mercy of the River and great floods occurred in 1812, 1833, and 1842. It was completely washed away in 1856. The River now flows over the site of ancient dwelling.

The founder Ghazi Khan Mirani would not be able to recognize the “new” city that was planned by British engineers on the principle of “Grid Iron Pattern” – all roads and streets meeting at right angle – and built on present location between the period from 1900-1910 about 15 Kilometres downstream on the bank of Manika Canal near the tomb of Ghazi Khan Mirani.

Let us just assume it: D G Khan was a great town on the bank of Indus in fifteenth century. Does the town even exist? Yes, only in history books. Many things combine to show that D G Khan was a gem in the time gone by.

One of the most exciting buildings of the past is the tomb of Ghazi Khan Mirani. The tomb was built in fifteenth century on an octagonal plan, like shrine of Shah Rukn-e-Alam in Multan, with battering walls and corner turrets. Standing in front of the tomb, dismayed, I could feel the depredation and vandalism that would have few parallels. Dome and upper story of the tomb have vanished.

The main entrance to the chamber of the tomb is in the East with two smaller doors in the northern and western directions are stripped of the gates. There are 11 mud graves inside the tomb and a graveyard has spread around the tomb. The walls are pitted. The pitchi cari and calligraphy inside the tomb is also fading. The slabs of stone painted with floral and geometric designs are falling. Once magnificent and imposing tomb is now sinking in ground. No body comes to lay flower or pay respect to the dead Baloch Sardar. In the past it had also been used to keep the animals. Relics of the tomb are certainly precious. Unfortunately, currently, D G Khan, more than any other Pakistani city, lacks sensitivity to its heritage. The condition of temples, dharam shalas and gao shalas is even worse. Most of them have been converted into residential quarters, some are being used as waste receptacles and from few others even the bricks have been taken away. “To retain the heritage and history of the city, at least two temples situated east of Tounsa-D G Khan Road and whatever is left of Ghazi Khan’s tomb should immediately be declared as protected monuments”, says Hashim Sher Khan, a social activist who has written to many national and international agencies including UNESCO for this purpose, “but to no avail” he adds. D G Khan of Waderas, Sardars and Tumandars and patriots like Sher Muhammad who made world Pakistani as part of his name seem to be on its way to decline.

Hashim Sher Khan says, “Dera Ghazi Khan is the cultural capital of Pakistan. It is not only geographically situated on the junction point of all the four provinces but is also a place where their cultural traditions meet”. Besides legendary hospitality, the most famous cultural symbols I encountered in the city during my stay are hamachas and tabaqs.

A son of the soil, Dr Ghulam Fareed once narrated a tale about his childhood to Raza Ali Abdi (BBC). The tale reads, “Big charpoys (coats) are found in every nook and corner of the city. These coats serve as open drawing rooms in the localities. There was one big coat in front of our house too. The day I left D G Khan for higher studies, I saw people sitting on that coat: talking, relaxing, and sharing. I saw the same people sitting, doing same things, once I returned from England after 15 years. Only they had gone a little old.” D G Khan is famous for big charpoys locally known as Hamachas throughout the country.

Another thing for which D G Khan is famous is tabaq meaning cooking utensil with wide mouth. Nanbais prepare meat and beef dishes in these utensils. British traveller Alexander Bern who came to D G Khan in 1936-37 wrote that there were 1597 shops in the city out of which 40 were of nanbais. Once the new city was inhabited, the nanbais also migrated and set up their shops in Pathar Bazaar. Now most of them have developed and converted their shops in modern eating joints but you can still find any thing from Nalli Nihari for breakfast to Siri Pae for dinner if you like. The only difference is that Tabaqs are made of cast iron instead of clay these days. Names of Ustad Allah Yar, Ustad Qader, Ustad Allah Ditta and Ustad Muhammad Siddique who were the best Tabaqis of their times are still remembered with respect.

As per the legend, the throne of Prophet Hazrat Suleman (A S) once landed on the hill range known as Suleman Range. Next to the city on the route to Quetta is Fort Munro Peak in Suleman Range. The first thing that came to my mind after turning on a rocky road to Fort Munro from village Khar (or Kharar) was a famous couplet that was composed by poet Mustafa Zaidi who was once a Political Assistant in Fort Munro. The poet lived here soaking up the scenery and isolation while contemplating his own future and love life. He composed, â€œInhe pathroon pe chal kar agar aa sako to aao, mere ghar ke raste main koi kahkashan nahin heyâ€. The going on the road these days is bad that gets worst in case of a light shower. Later, I also visited the library that was established by Mustafa Zaidi but now it has been converted into an office of some government department. By the way, who wants to read these days?