Khwaja Ghulam Fareed Sahib (1845-1901) or Khawaja Farid (Punjabi/Saraiki: ਖ਼੍ਵਾਜਾ ਫ਼ਰੀਦ,خواجہ فرید, ख़्वाजा फ़रीद) is considered one of the greatest Saraiki poets, Chishti-Nizami mystic andSajjada nashin (Patron saint) of the Punjab region of the Indian subcontinent. He was born and died at Chacharan Shrif but buried at Kot Mithan.

He was the son of Khwaja Khuda Bakhsh. His mother died when he was five years old and he was orphaned at age twelve when his father died. He was educated by his elder brother, Fakhr Jahan Uhdi.

He was a scholar of that time and wrote several books. He knew Arabic, Persian, Urdu, Sindhi, Panjabi, Braj Bhasha, and Saraiki. He was a poet of Saraiki and Urdu. He also wrote some poems in Sindhi, Persian, and Braj Bhasha. He was an imperialist poet. He opposed British rule inBahawalpur. He said to ruler of Bahawalpur in his poem, “You rule yourself on your state and finish police station of British from your state.” اپڑیں ملک کوں آپ وسا توں۔پٹ انگریزی تھانے

On 168th birthday Urs in 2008, many Saraiki nationists gathered to call for an independent Saraikistan. 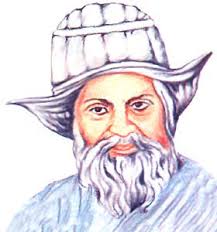 Faridiat (فریدیات)(फ़रीदीयत) is new topic about Khawaja Farid’s life, poetry and his mysticism.There are several books and hundreds articles on this topic.There are also experts of Khawaja Farid as under

There are hundred books on this topic. Name of few books are under